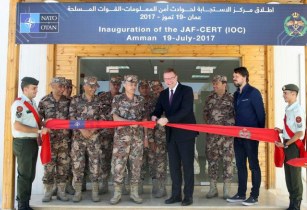 To help counter the growing threats across the region, NATO’s SPS Programme has been strengthening the cyber defence capabilities of the country, an active partner country in NATO’s Mediterranean Dialogue forum for cooperation.

Launched in 2014, the SPS project – led by experts from Germany and Jordan and further supported by France and the United States – responds to a key national priority and forms part of the Defence and Related Security Capacity Building (DCB) package for Jordan. The DCB Initiative reinforces NATO’s commitment to partners and helps to project stability beyond NATO’s borders by providing support to nations requesting defence capacity assistance from NATO.

“This project signifies a milestone for cooperation in the area of cyber defence with a partner nation, and is the first of its kind to have been approved by NATO Allies,” says Christian Lifländer, Head of NATO’s Cyber Defence Section. “It supported Jordan in developing capabilities to defend its infrastructure, mitigate the impact of cyber attacks, and enhance the overall security situation in the county,” he explains.

The SPS project established a Computer Emergency Response Team (CERT) within the Jordanian Armed Forces, which represents a major milestone in Jordan’s national cyber defence programme and enhanced the country’s cyber defence posture. Through training and professional development, it contributed to the creation of a qualified and well-trained workforce. The success of the project was underscored by a decree of the Jordanian government, declaring the project to be a recognised national priority.

Building on the project’s accomplishments, a follow-on multi-year SPS project is currently under development. It will deliver additional capabilities that will complement, consolidate and strengthen those built during the first project.