Torch Tower, Dubai, catches fire for the second time since 2015 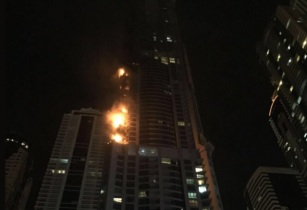 The Torch Tower, located in the Dubai Marina residential area, caught fire in the early hours of this morning, local time

This was the second time the 79-storey building had caught fire since 2015. No casualties have been reported by Dubai's Civil Defence service, with fire fighters successfully bringing the fire under control and evacuating the building by around 4am. The building was still undergoing repair work after the 2015 fire.

The cause of the blaze remains unknown but it appears that the flames spread upwards and vertically. An investigation by building management into the 2015 fire found that most of the damage was to the tower's exterior cladding. In 2013, the UAE updated its building safety code to require cladding on all new buildings taller than 15 metres be fire-resistant. However, older buildings are exempt from the new code.

Again, the issue of the safety of building materials, such as cladding, is back in the spotlight just weeks after the Grenfell Tower fire in London killed at least 80 people in June this year.

Dubai Media Office confirmed that the authorities had been able to provide shelter for affected residents in the nearby Princess Tower.